Some foods are just plain lucky to eat on New Year’s Eve. What associates these dishes with good fortune? That’s tough to pinpoint, but much of the answer has to do with symbolism and superstition. It also has to do with a human tradition of eating something special, like a birthday cake, to mark the passage of time. Like eating Sauerkraut on New Year’s Eve is a long-standing tradition in Germany.

Pork for progress! Pigs root around with their snouts moving in a forward motion, which is why many cultures around the world eat pork on New Year’s Day to symbolize progress for the coming year.

According to many, the more pork in your meal, the more luck you will have. So don’t just use ham hock and fatback to flavor your veggies; eat a baked ham or pork chops as a main dish. Chicken, according to the superstition, should not be eaten on Jan. 1 because a chicken scratches backward.

Need some recipes for pork? Click the link below to check out our delicious pork dishes created by some of the greatest chefs around.

Ed Chiles is the son of the late Governor Lawton Chiles. He’s the owner of several seafood restaurants: the Sandbar on Anna Maria Island, the Beach House in Bradenton Beach and Mar Vista Dockside on Longboat Key). Ed has a passion for local and sustainable food sourcing. Host Robin Sussingham spoke to Ed about the way his restaurants have been experimenting with cooking wild-caught hogs from Shogun Farms.


Journalists and political insiders packed into the Hay-Adams hotel in downtown Washington on Sunday for a breezy brunch hosted by Thomson Reuters to cap off White House Correspondents’ Dinner weekend.

Shogun Farms wild boar tenderloin was a big hit at the brunch.

Chef Art commented “The boar was a huge hit. We were the stars of The White House Corespondents Brunch put on by Thomas Reuter. 300 people. We served probably 500 portions. “

Amazing Dinner! Compliments to the server and the chef at BELLABRAVA.

I had the Wild Boar Ragu with asiago polenta, fresh herbs, pecorino. It was spot on. Shogun Farms provides the Wild Boar. I’m proud of our team who catches and cares for these animals to make sure they humanely make it to the kitchen of such great chefs. We have spent several years perfecting our wild hog meat and great to see others enjoying our product!

It was an honor to have James Beard Foundation Award winner Chef Art Smith feature our Wild Boar on the menu at their recent Cheers, Queers 2019! event in New York. Chef Art is a Florida native and well known celebrity chef who has created some wonderful recipes using our Wild Boar like the Shogun Farms Wild Boar Ragu with Homemade Pasta he served at the James Beard House.

Our Wild Boar was served along side of many other talented and creative chef’s dishes at the JBF event supporting Pride Month in NY.  This has been an exciting experience for us to see our wild boar on the table at the James Beard House, and even equally exciting that Chef Art enjoys creating recipes with it to share with the best of the best!

You can learn more about the amazing charitable work done by the James Beard Foundation at this link and all that they do to support the culinary arts. Shogun Farms particularly appreciates their mission and dedication to American food culture, because food is definitely something that can bring us all together!

The Benefits of Wild Boar Meat Surpass Beef, Pork and Even Chicken!

For centuries, wild boar meat has been a delicacy enjoyed by the aristocracy of Europe. It is increasingly sought after by chefs and consumers looking for a unique flavor. 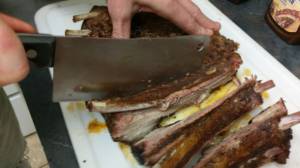 Wild boar meat has a strong, nutty, rich flavor that is unique and often not comparable to other meats.The meat is not gamey tasting, it’s meat is darker in color with a distinct, with a flavorful taste. It is not prone to illness or disease.

What’s the Difference Between Wild Boar and Pig?

It comes down to diet and exercise. Farm raised pigs are fed a homogeneous diet compared to that of wild boars which will give a more complex, deeper flavor. Wild boars are far more physically active than their farm raised counterparts which will alter their muscle/fat composition. Wild Boar are not kept in enclosures as are pigs. They are free to roam and forage for their food.

Although you may expect it to resemble pork, wild boar is a dark red meat. Unlike its domestic cousin, wild boar is also very lean and low in cholesterol. Wild boar is an excellent alternative to beef and pork for those who want food that is good for them without sacrificing taste and quality.

It started as a hankering for osso buco. It ended with fresh wild boar shanks, and a lesson in the wild pig overpopulation problem that has been steadily creeping across many Southern states for the past 20 years.

I was simply trying to source veal shanks, but in my small, remote town in northern Arizona, veal isn’t easy to come by. Looking for a good plan B, I reached out to a friend who had recently returned from a pig hunt in central Texas with fresh wild boar. “There’s plenty more where that came from,” he informed me as we loaded several meaty shanks into the trunk of my car. And thus began my whirlwind education on how these hogs —which can be particularly delicious —are running amok (particularly in Texas), and what’s being done to stop them.

The overpopulation problem in the United States is actually relatively new. European Wild Boars (also referred to as Russian Boars) were first introduced in Florida and then Texas between the mid-1800s to the early 1900s. As human colonization expanded across the south, both free-ranging (wild) and domestic pig populations were regarded as a necessary source of food. They were hearty and required little care. Most wild pigs found throughout America today are directly related to a combination of Eurasian wild boars and domesticated pigs that have escaped and become feral after spending a few generations in the wild.

But there’s a massive amount of wild hogs is overwhelming farmlands in Texas, and we can’t seem to figure out what to do with them. These wild pigs have become highly adaptable to their environments and have been doing a serious amount of damage agriculturally —with voracious appetites and destructive rooting, they affect agronomic crops as well as pasturelands, staying in an area long enough to devour its resources before moving on. A conservative estimate of the damage in Texas alone is $52 million annually with an additional $7 million needed to repair damage and control the population.

Wild pig meat is much leaner than commercially-raised pork, and far richer-tasting. It’s widely accepted that pigs that are allowed to roam and forage will taste better than pigs kept in pens. A free-range animal grazing on a wide variety of forgeable food gets more muscle-enhancing movement, which generates a deeper, more flavorful meat than an animal confined and raised solely on grain; and there are no antibiotics or hormone supplements to worry about with wild animals. Taking advantage of the wild pigs as food seems like a no-brainer —so why aren’t we eating more of them?