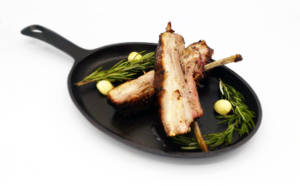 Acorn-finished pork is a centuries-old tradition that has been handed down from the Mediterranean region of Europe. Pigs are native to the hardwood forests of Eurasia and there is a growing movement in Europe and America to return to more traditional methods of pork production, which are more humane for the pigs, better for the environment, and healthier for the consumer than pork produced by modern factory farms.

In some regions, these ancient, traditional methods of raising pork never disappeared. The legendary jamón ibérico de bellota (Iberian acorn-finished ham), also known as pata negra, is widely considered to be the finest pork in the world. This Spanish ham comes from the black Iberian pig (cerdo negra) and is raised in southern Spain near the border with Portugal in oak forests called la dehesa. During the six month period (la montanera) every fall and winter that they forage in the Dehesa, the pigs eat 15-20 pounds of acorns (bellotas) every day, gaining up to two pounds a day, and enjoy fresh air and exercise. After they are “sacrificed,” the hams are cured for 12-36 months, producing a truly artisan meat.

Acorn finished meat is humane, allowing the pigs to enjoy fresh air and sunshine, as well as practice natural behaviors such as rooting and nesting.

Acorn-finished pork is tastier and healthier for the consumer. For decades, pork has been marketed as “the other white meat” due to the extreme leanness of factory-farmed pork. Acorn-finished pork, on the other hand, is deep red and well marbled with fat. Depending on the breed, many acorn-finished hogs even develop the famous “fatback” – 3 inches or more of fat from the pig’s back that was once considered a delicacy.

Interestingly, even though acorn-finished hogs are fattier than confinement-raised hogs, their meat is healthier. Studies of Spanish pata negra pork have found that the fat they produce is largely unsaturated, often to the point of being liquid at room temperature, and that it is extremely high in healthy omega-3 fatty acids and oleic acid, a monounsaturated fat that is also known to lower LDL (“bad”) cholesterol and raise HDL (“good”) cholesterol. In fact, the pigs are sometimes called “olive trees on four hooves” because the health benefits are similar to olive oil![/vc_column_text][/vc_column][/vc_row]